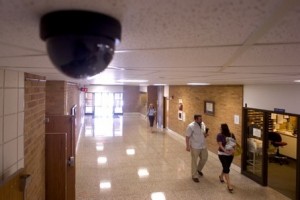 More important than protecting ourselves is protecting the ones that can’t protect themselves. Wouldn’t you feel better sending your child to a school that has security cameras and know their safety is assured?

We live in a world where when you step outside, there is no guarantee that you will eventually step back inside. The days of feeling safe are out the window whether we like it or not. This has proven to be correct in a number of instances over the past few decades, whether we are talking about the tragedies of Columbine High School, the Boston Marathon or the World Trade Center.

It’s reported that 84% of high schools, 73% of middle schools and 51% of primary schools use some sort of school security cameras to monitor the security and safety of the children in the schools. What could be the reasoning for the low numbers? There is no reason that number shouldn’t be 100% across the board. Could it be cost? Maybe the schools are just careless. The likely scenario is that schools take safety for granted when it shouldn’t be the case. They hear about these horrific school shootings and they think that there’s no way that could happen to them.

It’s also reported that 80% of schools have controlled access to the building during school hours. That means in one out of every five schools, intruders can just walk right in and quite frankly can do whatever they want. There is no reason for school security systems, such as: intercom systems and card access systems, to not be a part of all New York City Schools.

In a city such as New York City where the crime rate is so high, safety should never be taken for granted. The crime can easily transfer over to the schools. A lot of schools have security guards but they don’t have eyes in the back of their heads. Of course this will cost the schools more money, but to protect children in schools, money should never be an issue. The number of schools adding in security cameras is trending in the right direction but as previously mentioned, that number needs to be higher.

There are security camera companies in NY that will promptly install security or surveillance cameras at affordable prices. When it comes to security cameras in schools, the right time to do it is yesterday. Children deserve to be in a safe protected environment and having proper surveillance to protect the children is optimal for their safety.