Facial recognition technology was first introduced in the 1960s with funding from the U.S military and intelligence agencies. When it was made public knowledge, it was believed to be the software of the future. Over time with technological advances, facial recognition software has become one of the industry’s leading sources for safety and security.

The History of Facial Recognition 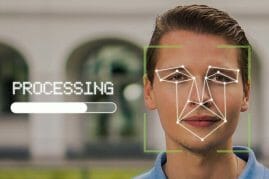 In the mid to late 60’s Woodrow Wilson Bledsoe, the “father” of facial recognition, created software that was used to manually record the coordinates of facial features such as the nose, hairline, and mouth. By using a RAND tablet, vertical and horizontal coordinates are entered manually onto a grid which releases electromagnetic pulses. Once the metrics are recorded, they are saved to a database. Once an image is submitted it will be compared against the metrics in the system to find the closest match. Once the 70s rolled around there were some adjustments to Bledsoe’s facial recognition software. While it was still a manual system, there were 21 specific visual biomarkers such as lip thickness and hair color that can help to identify facial features more accurately.  Even with these advancements, there were still accuracy issues in regards to this software.

In the mid to late 80s, the Eigenface approach was implemented to help with accuracy issues. This approach started by searching for a low-dimensional representation of facial images where the facial recognition is carried out. What they discovered was that feature analysis on facial images can help form a set of basic features. Later on, in 1990 the Eigenface approach was expanded upon one last time to detect faces within an image thus creating the first automatic facial recognition software.

How does the facial recognition process work?

Unlike DNA, Facial Recognition software needs to be able to detect even the most subtle features like aging, cosmetics, plastic surgery, and even the effects of drug abuse/smoking. The Feret Program was introduced to intelligent teams and law enforcement personnel alike which encouraged a commercial facial recognition market, meaning a database with facial images.

The step by step process goes as follows:

Along with this program, law enforcement created a database that allowed officers to access photos from the DMV which resulted in more arrests and criminal investigations.

In Hong Kong, China law enforcement implemented high-tech surveillance systems that use Facial Recognition that western countries are starting to adapt.  London and New York City are known for being the victims of domestic and foreign terrorism. With facial recognition implemented into their surveillance technology, this helps law enforcement reactions to be quicker and more efficient.  Authorities have access to facial recognition software and can be used on any footage received, all it takes is a matter of seconds. It is important to note that these images used are not stored for more than 24 hours.

With only 5,000 CCTV in New York City  the use of real time Facial Recognition is not used. With an 80%+ chance of a match, authorities in the United States are able to submit the photographs into three different databases such as wanted felons, sexual predators, and missing children that compares the static image to their mugshot, ID, or passport. As cameras are actively monitoring a space, authorities can manipulate the camera’s focus and/or direction. Once a match is made authorities are alerted and can respond quickly and safely. New York City has legalized Facial Recognition software as well as 38 states but there is still controversy over invasion of privacy as well as accuracy in regards to women and minorities.

How London Uses their CCTV and Facial Recognition System

In London however, with more than 15,000 CCTV a strict level of active surveillance has been implemented that is only observed in China. There are more CCTV cameras in Victoria Station than anywhere else on earth. This station is up the road from Buckingham Palace, a main transit hub for all of southwest London, and parliament is down the road; it is basically a security center for the UK. Over the years, London has faced several terror attacks as well as an increase in crime with murder reaching a new peak in the past 10 years. The surveillance technology goes beyond your average facial recognition system as the software can immediately identify someone on any “watch” list within seconds of being filmed. The use of real-time facial recognition technology in London has reduced violence greatly as it is just an added tool to assist law enforcement. The live feed helps to match faces of those against a specific wanted list so that the privacy of other individuals can remain intact. If there is a group of individuals with just one targeted person of concern, the ones not a part of the wanted list have their faces blurred out.

How Television and Movies Highlight Facial Recognition and Final Thoughts

In the 2017 Netflix Original Manhunt: The Unabomber, facial recognition software had helped aid in the Ted Kaczynski case.  After threatening law enforcement officers to “Post or Perish” his manifesto, they decided to reason in an attempt to capture him and as they believe he will purchase his publicized work.  Selectively choosing The Washington Post in San Francisco to publish his manifesto, law enforcement officers staked out the only known news stand that sells that paper. Setting up undercover agents throughout the public square surrounding the news stand along with FBI personnel watching from above, Facial Recognition Software was used to identify and eliminate potential suspects that fit the description. After a customer purchased a paper, they would run their image along with background against their automatic software to determine the status of the person and either “clear” them or not. While they were not able to capture the Unabomber at that point in time, it helped to show how quick, fast, easy, and safely Facial Recognition software is when it comes to protecting the general public.