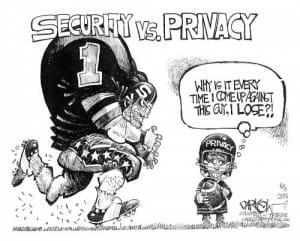 For decades, we have all wondered where the correct balance lies between protecting our privacy and security. There are strong arguments from both sides but let’s be honest, there is only one winner.

When it comes to the debate of privacy vs. security, as Joanne Kaufman of the New York Times said, “Security rules, and privacy concerns go out the window — the one with the camera attached. Big Brother, come on over and bring your friends.”

Unfortunately,a surveillance security cameras society doesn’t see it that way. The momentum of the scale alters back and forth between the arguments. It isn’t until there is tragedy that the scale tips heavily in favor of security.

A perfect example of this was the terrorist attacks on September 11, 2001. There was no larger spike than when the attack of the World Trade Center happened more than 12 years ago. The American government has invested more than $1 trillion in domestic security since the attacks.

Of course, politicians, authors and citizens continue to argue in favor of privacy.

“I’ve never liked the idea of security versus privacy because nobody feels more secure in a privacy state,” said Bruce Schneier, security expert and author of Beyond Fear: Thinking Sensibly About Security in an Insecure World.”

Nobody? Really? It’s nothing short of ludicrous to think that statement could even be close to true. Think about two scenarios, which would you feel safest in? The one with the up-to-date security or the one with nothing? There is a reason that security cameras seem to be home decor in apartment buildings rather than a luxury.

One company that can install security cameras to help protect your safety or your business is Total Security. They have been in business for over 11 years, serving the Greater New York area.