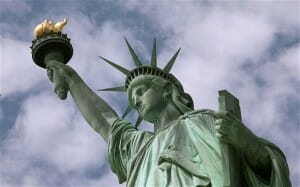 The Statue of Liberty and Ellis Island has upgraded their commercial security camera system in preparation for the holiday season. There was even a morning media tour to showcase the new security renovations.

It was just one year ago that Hurricane Sandy steamrolled into New York City and caused 53 casualties – including hundreds of demolished houses. It cost New York City more than $32 billion in reparations.

The statue of liberty and Ellis Island had a security camera system already, but it was completely outdated. The old analog system was upgraded for a state-of-the-art digital security system. The new system will not only allow their security team to see things more clearly, but the cameras actually cover more area than they did with the analog cameras. The upgrade should drastically help law enforcement, the National Park Service and State Park Police, do their jobs more efficiently with better quality video and more coverage.

The importance of bolstering security at the Statue of Liberty cannot be exaggerated enough. This is very well timed because  this historical landmark location can become very populated with tourists during the holiday season which increases the threat of crime.  As people come in droves the state-of-the-art security system should help keep tourists safe and allow security workers to do their job much easier.