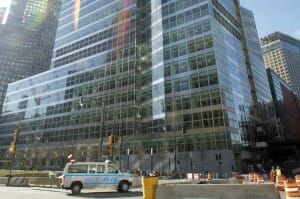 You would think that just 12 years after the September 11 terrorist attacks that killed almost 3,000 civilians, that changes would be made and the city would be safer. Think again.

A security camera recorded two men parachuting next to the Goldman Sachs building near the World Trade Center at 3:07 a.m. on Sept. 30, 2013. The two men fled the scene and authorities are currently looking for the individuals.

“They were seen walking away with parachutes,” police Commissioner, Raymond Kelly told the Daily News.

There is little known about the incident. The only thing that is for certain is that two men parachuted from the sky near the world trade center. However, there are several questions that need to be answered. Was this just a pair of thrill seekers looking to base jump into the night to get an adrenaline rush or was it something more? Where did the jump from, was it off a building or an unidentified aircraft? Who’s to say this wasn’t some sort of test for something bigger, say a terrorist attack?

Quite frankly it is baffling how this can happen when approximately 12 years ago thousands of people died in the same location. There is no indication that the men were anything more than a couple of thrill-seekers looking to parachute from the sky. However, it has not been confirmed and authorities are still investigating.

This is just another instance showing how important security cameras in Manhattan are. If not for these security cameras these men would have gone completely unnoticed. This just goes to show you that a security or surveillance camera is not a luxury, it is a necessity.

If a pair of individuals can get away in the middle of New York City, what makes you think the same can’t happen to your home or business, regardless of where you reside?