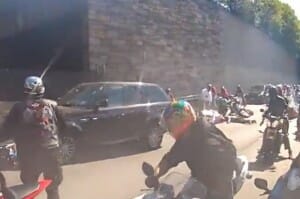 An incident occurred on a Sunday afternoon in October in NYC where a family was threatened by a gang of motorcyclists. The family was driving on a New York City highway, when they were suddenly cut off by more than 50 motorcyclists and eventually had to come to a complete stop. Feeling threatened, the driver of the SUV took action, running over motorcycles and riders in the process, which eventually led to a chase that led to a brutal attack of the driver of the sport utility vehicle, Alexian Lien.

“We were placed in grave danger by a mob of reckless and violent motorcyclists,” wife of the SUV driver, Alexian Lien told CNN. “My husband was forced under the circumstances to take the actions that he did in order to protect the lives of our entire family.”

Three motorcyclists were injured, including David Mies. Mies is currently in critical condition with every single one of his ribs fractured and bruised lungs that require him to breathe using a respirator. Many of the bikers want the driver of the SUV,  Lien to be charged.

Who exactly is in the wrong in this situation? These rebels on motorcycles cut off a vehicle on a moving highway and eventually brutally attacked the driver. On the other hand, the driver of the SUV ran over motorcycles and injured riders in the process without being attacked or threatened yet.
Normally figuring out this case would be pretty tough. Both sides have a case. However, one of the motorcyclists was wearing a helmet camera that caught all of the action.

A scenario such as this one is a perfect example of how valuable a car camera can be. Can you imagine if you were in a situation similar to this or a situation where you needed to provide concrete evidence? There is no stronger evidence than having a video of the incident. This person was wearing a helmet camera which happened to be very convenient, now that this is a case that is escalating in popularity. You likely don’t wear a helmet when driving your car. A New York car camera records everything you see while you are on the road. It also proves pretty handy when you need to prove that fender bender wasn’t actually your fault. When you need to provide concrete evidence from the view of your car, a dashboard car camera is the way to go. They are also known as car cameras, car spy cameras and in-car surveillance cameras.

Who do you think is in the wrong in this situation? If you were the judge would you rule in favor of the motorcyclists or SUV driver and his family?