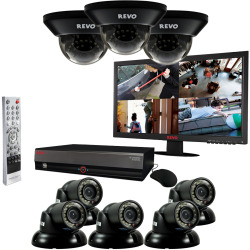 If you have a surveillance camera system installed at your home or business and you would like to record and archive recorded footage, using Digital Video Recorders (DVRs) will be your best option.

A DVR system is a popular method to store recorded security footage. It contains software, storage units, and a computer hard disk incorporated in a single equipment. Digital Video Recorders have the capacity to accept video feeds and convert them to digital. They can store hours of footage and they have the ability to use motion detection to start recording.

DVRs come in different sizes, and they are designed to meet various security applications. They can be small, easy to carry, and conveniently be paired with a hidden surveillance camera, or they can be as big as a personal computer. Some DVRs can be connected to a remote network which allows you to view footage over the internet.

This type of DVR system is a stand-alone piece of equipment that accepts analog CCTV camera inputs for compression and stores footage on a local HDD. The operating system and DVR software are on the chip and it has a hard drive to store recorded images. Embedded DVRs usually have a number of internal hard-drive spaces, and more external hard-drive connections for extended recording times.

Additionally, this type of DVR system uses an exclusive real-time embedded operating system that is not accessible to the external environment. They are more secure since they are much less susceptible to hacking, viruses, and other external security attacks.

Hybrid DVRs are unique since they can accept more than one type of video signal – analog CCTV and IP camera inputs can be used as video sources. This level of flexibility is not available from older versions of DVRs. They allow easy transition from analog to IP-based surveillance.

Since they support both CCTV and IP cameras, users don’t have to limit their camera recording options. It is recommended to install analog cameras in less vulnerable areas and install high-resolution IP cameras in areas with high-level of security risk. The key advantage of using this type of DVR system is that it makes it possible to easily manage and record both analog and IP surveillance cameras.

A PC-based DVR is normally integrated into a surveillance station with software compression or hardware compression running on a personal computer. This type of DVR system contains a network card, a video board, a motherboard, and a memory drive, plus a DVR capture card with video inputs for analog security cameras along with Ethernet ports for IP-based cameras.

One of the best features of a PC-based DVR is that they are flexible in terms of storage space. They are more expandable and upgradeable so that you can add additional hard drives. You can also customize its remote-access options.

This DVR works by converting analog inputs into digital signals which will then be compressed and stored on a hard disk for further processing. This system allows the user to search and retrieve captured images or recorded videos at any time.

All types of DVR systems are highly efficient but it is important to install the right type that will meet your security needs. Consult a professional security camera system installer to help you find the most efficient DVR system for recording security footage.